IN THE HIGH COURT OF JUSTICE CHANCERY DIVISION PATENTS COURT

These action is concerned with patents relating to tadalafil. Tadalafil is the generic name for a product sold under the brand name CIALIS for male erectile dysfunction and under the brand name ADCIRCA for pulmonary arterial hypertension. CIALIS is also sold for benign prostatic hyperplasia. The patents and exclusive licences are held by Lilly and ICOS. In these actions, the pharmaceutical companies Actavis, Actelion, Teva, and Generics (UK) (Mylan) are seeking to clear the way. The relevant SPC expires in November 2017. The commercial value of these proceedings is very high. Based on public IMS data, branded sales of CIALIS for 2014 in the United Kingdom come to about $99 million while sales of ADCIRCA were $1 million. The European sales amount to about $ 3/4 billion annually and Lilly's accounts for 2014 showed a figure of $2.29 billion for global turnover of CIALIS.

An important part of the context in this case relates to the famous drug VIAGRA. By the relevant priority dates (1999/2000), Pfizer had launched the compound sildenafil citrate under the brand name VIAGRA as a treatment for erectile dysfunction. It had attracted enormous public attention as well as attention in the pharmaceutical industry. VIAGRA was first launched in the USA after approval by the FDA in March 1998 so that by the earliest of the various possible priority dates it had been on sale for about a year. In fact at least in the industry it had attracted attention before launch. Sildenafil is an inhibitor of an enzyme known as phosphodiesterase 5 (PDE5). That enzyme acts in the corpus cavernosum tissue in the human penis and plays a role in maintaining erections. It is the inhibition of PDE5 which accounts for sildenafil's mode of action. Tadalafil is also an inhibitor of PDE5. Many of the issues involve considering the thinking of a person skilled in the art aware of sildenafil and considering tadalafil as another possible inhibitor of PDE5.

A pharmaceutical unit dosage composition comprising 1 to 5 mg of a compound having the structural formula: 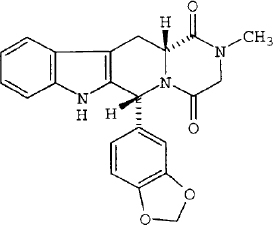 said unit dosage form suitable for oral administration up to a maximum total dose of 5 mg per day.

The structural formula represents tadalafil. The other relevant claims of 181 are set out in Annex 1.

There is a debate about claim construction concerning the reference to a maximum total dose per day. There are also issues on infringement which relates only to Actavis and Mylan. One is about whether a threat to infringe has been established and this applies to 181 and 092. The other is about the terms of the marketing authorisation(s) for the generic products. Most of the time at trial was taken up with issues concerned with validity. Recognising that Actelion does not challenge the validity of the 181 patent, I will still just refer to "the claimants" as a whole unless it is necessary to distinguish between them.

The claimants contend the relevant claims are not entitled to priority from the priority document. If priority is lost then further citations become relevant prior art (see below). The priority issue for 181 involves two points. First the claimants allege that tadalafil is not identified in the priority document or at least not identified sufficiently clearly nor in the correct context to support the claims of 181. This is mostly an argument about chemical nomenclature. Second the claimants allege that other features of the claims of 181 (relating to the maximum daily dose and/or amounts in dosage forms) are not supported in any event.

Lilly denies these allegations. It maintains that tadalafil is the compound disclosed in the priority document and the claims are entitled to priority.

The claimants take two added matter points against the 181 patent. They are similar to the second substantive priority issue but this time focussed on comparing the claims in force with the disclosure of the application as filed rather than with the priority document. The application as filed is said not to disclose dosage forms of from 1–5mg and not to disclose a maximum daily dose of 5mg. Lilly denies the patent includes added matter.

Anderson , Stoner and Oren were all published after the filing date for the 181 patent and therefore can never be relevant for obviousness. However they all designate both GB and EP(UK), amongst other states, and so may be relevant as novelty-only prior art under s2(3) of the Patents Act 1977 (Art 54(3) EPC). That will depend on dates and priority.

Stoner was filed on 3 rd March 2000 and so if 181 loses priority, the contents of the Stoner application are citable for novelty. Stoner claims priority from a US filing on 8 th March 1999 which is earlier than the claimed priority date for the 181 patent, however in order for the claimants to argue that Stoner would be be citable under s2(3) even if 181 kept its priority date, it would be necessary to establish that the relevant matter in the Stoner...