IN THE SUPREME COURT OF JUDICATURE

ON APPEAL FROM PATENTS COUNTY COURT

Lord Phillips Of Worth Matravers Mr

The facts are set out clearly in the judgment. They are no longer in dispute. So I can summarise. All the cases are for umbrellas which fold into an oblong shape. The cases are correspondingly oblong. In each instance the umbrella is to be pushed into the end of the case. The differences between the variants all lie in the "cuff" – the open end into which umbrella is pushed. For present purposes there is no difference between types A and B on the one hand and types C-E on the other. So I will call them A and C. 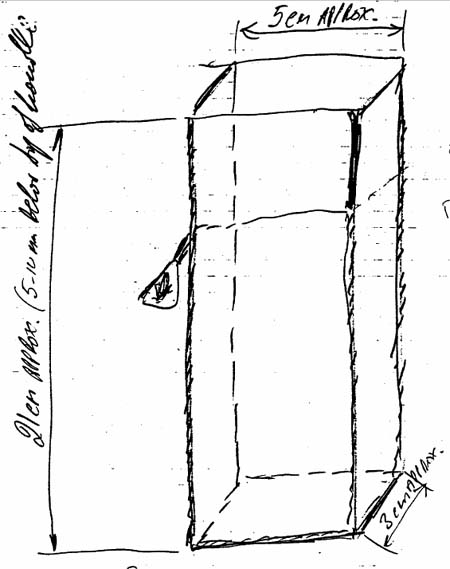 The drawing is not to scale but conveys all you need to know. The article is an open flat box, 21x5x3 cm in overall dimensions. The "cuff" is about 4 cm long. There is a slit in one corner of the cuff – to make insertion of the umbrella easy. The stitching along the sides of the case give it a sharp box-like appearance – without it the case would be less defined visually. The cases made and sold by Fulton ("Miniflat cases") are made to this design.

The first Totes cases (i.e. A and B) were straight copies of the Fulton cases. They too had a slit and stitching. When Totes learned of the registered design they hurriedly changed their cases to types C-E. The change was to remove one short side of the cuff altogether. This is an agreed picture of C:

It is a copy of the entire Fulton article, minus the cut-out —of nearly the whole thing. And all of it comes from copying.

It is not disputed that Fultons own unregistered design right in the whole, slit, design. That is what is shown in the design drawing and was the design of the first article made by Fultons. For present purposes it does not matter whether one goes by the drawing or the article, for s.213(6) of the Copyright Designs and Patents Act 1988 ("the Act") says:

"Design right does not subsist unless and until the design has been recorded in a design document or an article made to the design."

I turn to set out the key provisions of s. 213 dealing with subsistence of unregistered design right and s.226 dealing with infringement:

"(1) Design right is a property right which subsists in accordance with this Part in an original design.

(2) In this Part "design" means the design of any aspect of the shape or configuration (whether internal or external) of the whole or part of an article.

(3) Design right does not subsist in –

(a) a method or principle of construction,

(b) features of shape or configuration of an article which –

(i) enable the article to be connected to, or placed in around or against, another article so that either article may perform its function, or

(ii) are dependent upon the appearance of another article of which the article is intended by the designer to form an integral part, or

(4) A design is not 'original' for the purposes of this Part if it is commonplace in the design field in question at the time of its creation.

(a) by making articles to that design, or

(b) by making a design document recording the design for the purpose of enabling such articles to be made.

In their pleading Fultons put their alternative cases as follows:

The Judge held Fultons were entitled to design right both in the whole of the case and in the alternative "cut-out" design described by the underlined words. As I have said, he held that types C-E did not infringe the right in design of the whole article but that it did infringe the right in the "cut-out" design. Fultons do not cross-appeal the finding of non-infringement of the design in the whole case – rather grudgingly accepting that it would be difficult to show an error of principle which is the standard needed to succeed on appeal in this sort of case, see Designers Guild v Russell Williams [2001] 1 WLR 2416.

Totes say the Judge was wrong in law – that the law confers no separate unregistered design right in a cut-out design. They say that the notion of such a design is – to use the Judge's word —a "chimera." Only one thing was designed, the Miniflat case as a whole – the "cut-away" design is a different design, not envisaged by Mr Fulton. They reinforce the submission by the forensic point that Mr Fulton in his evidence positively asserted that customers preferred the slit design to the cut-out design – thus emphasising the fact that the cut-out is different from the slit.

The Judge rested his decision both on the language of s.213(2) and authority. Ultimately the question turns on the language, but it is convenient to consider authority first. It is all one way – against Totes. I turn to review first the cases and then the learned writers.

In this connection the manner in which the claimant formulates its particulars of claim in the pleadings is important. Laddie J focused on this point in Ocular Sciences Ltd v Aspect Vision Care [1997] RPC 289 at 422. He said:

"This means that the proprietor can trim his design right claim to most closely match what he believes the defendant to have taken. The defendant will not know in what the alleged monopoly resides until the letter before action, or, more usually, the service of the statement of claim. This means that a plaintiff's pleading has particular importance. It not only puts forward the claim but is likely to be the only statement of what is asserted to be the design right."

Fulton has formulated its claims to design rights in a...