This is an action for infringement of two European Patents (UK) numbers 1 117 894 ('894) and 1 112 433 ('433). Both relate to drill bits for drilling in rock. '894 is in respect of an invention entitled ‘Roller-cone bits, systems, drilling methods, and design methods with optimization of tooth orientation’ and was referred to at trial as the Orientation patent. '433 is in respect of an invention entitled ‘Roller cone drill bit, method of designing the same and rotary drilling system’ and was called the Force Balancing patent at trial.

These proceedings started life in the County Court. The hearing before me, which lasted 13 days with substantial pre-reading, revealed that the subject matter of the patents was complex and more than justified the 15-day estimate that the trial ultimately received. The proceedings were not suitable for the County Court and should not have been started there.

The patents are interrelated. The Orientation patent contains three claims, each of which is to ‘a method of designing a roller cone bit’. The Force Balancing patent contains claims to a ‘method of designing a roller cone drill bit’ (claims 1 to 5), three independent claims to drill bits having prescribed qualities in use (claims 6, 7 and 8) and a claim to the use of the bit. The allegedly infringing bits are designed using a complex computer program called the ‘Integrated Dynamic Engineering and Analysis System’ software, abbreviated to IDEAS, which may be considered to be a sophisticated simulation or modelling system. The input to the IDEAS system is a design of bit produced using CAD software. The performance of that design of bit under defined conditions in specified formation (type of rock) is simulated using IDEAS. The design is adjusted by the designer in response to the results of the simulation and again simulated.

The foregoing summary is enough to explain that apart from the usual questions of anticipation and obviousness this case raises a basic question relating to the inherent patentability of the alleged inventions. There is a serious attack on the sufficiency of the disclosure of both patents, to rebut which the patentee (to whom I shall refer as ‘Halliburton’) relies in part upon mutual cross-references and a cross reference to another document. All of this raises a difficulty of presentation of the issues in the case. Even at trial, there was no real agreement which patent should be taken first, the defendants (‘Smith’) putting the Orientation patent first but Halliburton starting off with the Force Balancing patent. In this judgment I shall deal with infringement and validity of each patent separately, taking the Force Balancing patent first.

Smith called Professor Newland, Emeritus Professor of Engineering in the University of Cambridge and holder of the 1875 Chair in Engineering from 1976 to 2003. He has wide engineering experience both practical and theoretical, but has no experience of drilling. His evidence was supported by that of Professor Cooper, a Professor at the University of California at Berkeley with wide experience of the engineering of drilling but little direct experience of bit design. His interest is principally in cutter materials. Halliburton called evidence from Mr James Hall, who had wide experience of drill bit design and manufacture with, among others, Hughes Tool. He had no experience of the design of computer simulations with which Professor Newland was familiar, and was, I think, less accustomed to expressing himself mathematically, with which the patents are very concerned. The experts should have been complementary in their knowledge, but, in fact there was little on which Mr Hall could agree with the others. Prof. Cooper was subjected to strong criticism on the ground of a lack of experience either in computer modelling or in drill bit design. Since he knew much about drilling generally I found his evidence helpful.

Both patents are concerned with the design of roller cone drill bits, and in particular the type of bits used in vertical drilling for such purposes as oil and gas wells. Generally speaking, all such bits have three cones that rotate about their long axis. Each cone is provided with milled teeth integral with the cone or inserts made from tungsten carbide. The three cones are mounted on bearings and rotate about spindles fixed to three legs in such a way that the lower part of the side of the cone is generally in the plane of the hole bottom. The legs are welded together at their upper end which is provided with a threaded connection to which the drill string may be attached. I was provided with a number of bits in accordance with Smith's Notice of Models, which I examined to obtain a general impression of their construction. The transparent model is useful.

The parties made a serious attempt to put all the uncontroversial matter together with the material that it was agreed formed the relevant common general knowledge in a single copy report agreed by the experts. The result (a document showing extensive markup) is difficult to read and some of the alterations are trivial. Nevertheless, the cross-examination of Mr Hall showed that on the issues apparently in dispute his views were not substantially different from those advanced by Professor Cooper, with the important exception of Professor Cooper's views on the obviousness of balancing downforce as a matter of common general knowledge. Mr Hall was anxious to emphasise that some of the matters to which Professor Cooper referred were within the expertise of the driller in the field rather than a bit designer, but in the result these differences are immaterial. Accordingly, I shall rely on the common general knowledge part of Professor Cooper's report augmented by that of Mr Hall for the background. I will only summarise the principal points of relevance here.

A bit in use carries a very substantial weight, called the weight on bit, or WOB. This weight is made up of the drill collar and the rest of the drill string and is controlled by a tackle at the top of the string, which is supported by the derrick. Generally speaking there is a very easy introduction to the topic in the first chapter of the book called Rabia (‘Oilwell Drilling Engineering: Principles and Practice’ by HussainRabia), which is an undergraduate textbook located by Professor Cooper that is relied on as exemplifying the common general knowledge.

The manner in which the bit penetrates rock depends generally upon the geometry of the cones in the bit and the shape of the teeth. Rounded carbide inserts are used in hard rock: they break the rock by crushing it as the tooth rolls into contact with the formation. The forces employed are substantial: the weight on bit may be as high as 60 tonnes and the rate of rotation 60 rpm. Softer formations require (in different degrees, depending upon the other drilling variables) a combination of both a crushing and a scraping action, for which the inserts or milled teeth will be more chisel-shaped. To ensure a degree of scrape, the cones are positioned so that their axes of rotation are not radial of the longitudinal axis of the hole, but are slightly offset so as either to lead or to lag a purely rolling motion, like this: 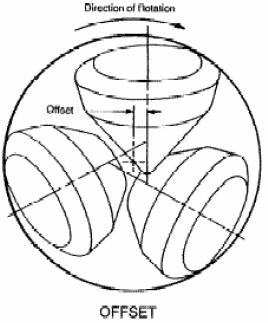 The diagram shows a linear offset from the centre axis: obviously this can also be viewed as an angular offset from the radius of the bit. Whatever the precise orientation of the cones, the bit must be designed so that the rows of teeth each do their share of the work. It is helpful to think of the bit rotating and penetrating the formation: if a row of teeth follows the same path as another both will be doing less work. The following example is given by Professor Cooper, in which Ring A is cut by the heel or gage row of all three cones, ring B by cone 1, rings C and E by cone 2 and ring D by cone 3: 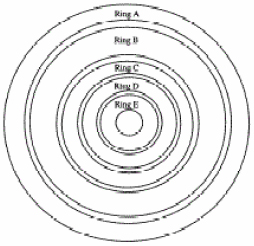 This diagram shows that the cones in a given bit are always different from each other. Each will be subjected to different dynamic conditions at the bottom of the hole, and there is no a priori reason to suppose that they will tend to wear evenly. The movement of the teeth is composed of a rolling about the cone axis and a translational component resulting in gouging and scraping, and is not easy to visualize. The force on the teeth in contact with the formation is itself the force which rotates the cones as the drill rotates.

The economics of drilling require that the bit be withdrawn from the hole as infrequently as reasonably possible. The rate of penetration needs to be as high as possible consistent with not causing premature wear of the bit, which obviously can destroy the advantage of a high rate of penetration if time is lost in early bit replacement. The process of ‘tripping’, which means the raising of the bit, is not trivial and is expensive—there may be thousands of feet of pipe to raise and uncouple. This means that durability of the drill is important and, with rate of penetration, is a primary concern of the user. [1]

Both before and after the priority date, the task of the manufacturer of drill bits has been to achieve durability with a good rate of penetration. It is...