IN THE COURT OF APPEAL (CIVIL DIVISION)

ON APPEAL FROM THE HIGH COURT OF JUSTICE

Idenix Pharmaceuticals, Inc. ("Idenix" or "IPI") is the joint proprietor of European Patent (UK) No. 1 523 489 which describes and claims a family of nucleoside analogues for treating HCV and other Flaviviridae infections. These nucleoside analogues have 2'-methyl-up-2'-fluoro-down substituents on the sugar moiety. The application for the Patent, International Patent Application No. WO 2004/002999 ("the Application"), was filed on 27 June 2003. The Patent was granted on 12 March 2014.

In these proceedings, issued upon grant of the Patent, Idenix claimed that Gilead Sciences, Inc. and Gilead Sciences Ltd. (collectively "Gilead") had infringed the Patent by making and selling sofosbuvir, which they marketed under the brand name Sovaldi. Gilead denied infringement and counterclaimed for the revocation of the Patent on the grounds of lack of novelty over Gilead's own International Patent Application PCT/US2004/012472 ("the Pharmasset PCT"), lack of inventive step, insufficiency and added matter.

Gilead argued the Patent was invalid for lack of inventive step because it did not make a technical contribution. It was, it said, not plausible that substantially all of the compounds encompassed by the claims would be effective against Flaviviridae. Indeed, this proved to be, at least in part, common ground because Idenix's own expert on this issue, Dr Andrea Brancale, accepted in his first report that claim 1 covers classes of compounds which would not be thought likely to have antiviral activity. This led Idenix to make a conditional application to amend the Patent.

The allegation of insufficiency had three limbs. Gilead contended first, that the disclosure of the Patent did not make it plausible that substantially all of the claimed compounds would have activity against Flaviviridae. This allegation was clearly closely related to that of lack of inventive step. Secondly, the Patent did not enable the skilled person to synthesise without undue effort the 2'-methyl-up-2'-fluoro-down compounds falling within the claims. And thirdly, the Patent did not enable the skilled team to perform the invention across the breadth of claim 1 without undue effort.

Finally, I should say a word about the allegation of added matter. This had two limbs. The first was an attack on claim 1 as granted. Gilead contended that this claim, directed as it is to compounds of only one of the formulae disclosed in the Application, adds matter because it focuses attention on this formula whereas the skilled person reading the Application would never have thought it stood out. The second was an attack on claims 4 and 5 as granted. Here Gilead argued that the claims included limitations of which there was no adequate disclosure in the Application.

The action came on for trial before Arnold J in October 2014. It lasted for 11 days, in the course of which the judge heard evidence from four technical experts and four experts in US law. He also heard evidence from five witnesses of fact. In his judgment, given on 1 December 2014, he held that sofosbuvir fell within the scope of the claims of the Patent but that the Patent was invalid for lack of novelty, lack of inventive step and insufficiency. He rejected the allegation of added matter, save in relation to claim 4. He also refused to allow an amendment to claim 1 to delete those groups of compounds which Dr Brancale accepted that the skilled person would not expect to have activity. This amendment would, he held, result in the amended specification disclosing adding matter.

Upon this appeal Idenix contends the judge fell into error at almost every stage of his analysis. In summary, it contends that he:

i) wrongly held that the Pharmasset PCT was entitled to priority;

ii) fell into error in the way that he approached and assessed the common general knowledge, and that this fatally undermines his findings in relation to lack of inventive step and insufficiency;

iii) wrongly concluded the Patent lacked an inventive step; and that he ought to have found that it was plausible that the claimed molecules would have antiviral activity;

iv) fell into error in finding that the Patent was insufficient; in particular, he applied the wrong test of enablement and he erred in principle in the way he assessed the evidence, focusing unduly on the work of one individual and attaching inadequate weight to the expert evidence;

v) fell into error in addressing the issue of added matter both in relation to claim 4 of the Patent as granted and the proposed amended claim 1.

Gilead has filed a respondent's notice. It contends that the judge ought to have found that claim 1 of the Patent as granted was invalid for added matter.

It is convenient to deal with these issues in the following order: first, common general knowledge; secondly, inventive step; thirdly, insufficiency; fourthly, added matter and amendment; and finally, if and so far as necessary, novelty and the priority of the Pharmasset PCT. But before doing so, I must say a little about the technical background and the disclosure of the Application and the Patent.

Deoxyribonucleic acid (DNA) and ribonucleic acid (RNA) are large, complex, naturally-occurring organic molecules. They are polymers composed of monomers called nucleotides. Nucleotides consist of a five carbon (or "pentose") sugar, a heterocyclic aromatic base (or "nucleobase") and a phosphate moiety, as shown below: 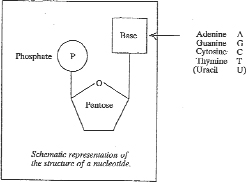 A pentose bonded to a nucleobase without a phosphate moiety is referred to as a nucleoside. The bond formed between the sugar and nucleobase components of nucleosides is termed a glycosidic bond, and it is formed in a process known as glycosylation.

Pentoses have multiple chiral centres. In this form of diagram, the sugar ring is represented as a planar structure. The bold wedged bonds indicate that the 2—and 3-carbon atoms of the sugar ring point towards the viewer whereas the oxygen atom points away from the viewer. The plain bonds pointing upwards and downwards from the sugar ring indicate that the attached substituents are respectively above and below the plane of the ring. These are commonly referred to as the "up" and "down" positions respectively.

Copies of nucleic acids are made by the action of polymerase enzymes, which catalyse formation of bonds between individual nucleotides. The critical interaction in polymerase-catalyzed DNA or RNA synthesis involves the 3'-hydroxyl group of the nucleotide on the DNA or RNA of the so-called "primer" strand, which is...