The Second Defendant did not appear and was not represented

The Claimant ("MedImmune", formerly known as Cambridge Antibody Technology Ltd ("CAT")) and the Second Defendant ("the MRC") (jointly, "the Patentees") are joint proprietors of European Patents (UK) Nos. 0 774 511 ("511") and 2 055 777 ("777") (together, "the Patents"). MedImmune is the exclusive licensee of the MRC's interest in the Patents. MedImmune alleges that the First Defendant ("Novartis") has infringed the Patents by sales of a pharmaceutical product whose international non-proprietary name is ranibizumab and which is sold under the trade mark Lucentis. Lucentis is approved for the treatment of an eye condition known as wet age-related macular degeneration, which can lead to loss of vision. Novartis disputes infringement and counterclaims for revocation of the Patents. The MRC has been joined to the claim so as to be bound by the result, but has not played an active part in the proceedings. Ranibizumab was developed by Genentech, Inc., which is not a party to the proceedings.

The Patents are members of a family of European patents and patent applications based on International Patent Application No. PCT/GB91/01134 filed on 10 July 1991 which was subsequently published as WO 92/01047 ("the Application"). Each of the patents in this family claims priority from five priority documents, namely: 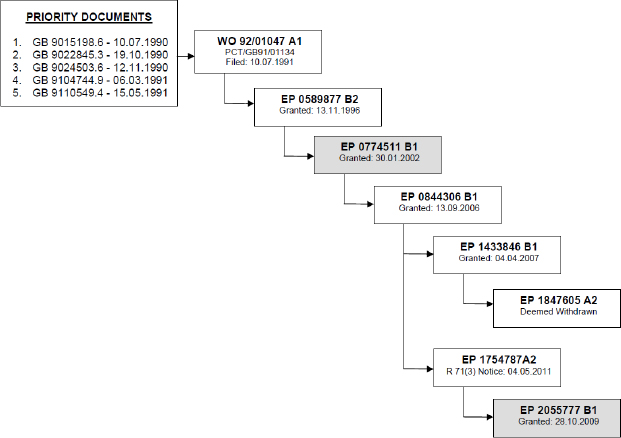 Novartis challenges the entitlement of the Patents to priority. Attention has focussed on the entitlement of the Patents to priority from the third of the priority documents listed above ("PD3") since (a) MedImmune accepts that the Patents are invalid if they are not entitled to priority from that document and (b) Novartis does not rely upon any prior art which was made available to the public in the interval between the filing dates of the first and third priority documents. Novartis disputes both that the claimed inventions are disclosed by PD3 and that the Patentees have the right to claim priority from PD3. It became clear at an early stage of the trial, however, that the parties were not ready to contest the latter issue. Accordingly, it was agreed that that issue will be tried separately at a later date.

Although MedImmune has not conceded that the Patents are invalid over any particular item of prior art if they are not entitled to priority from PD3, it is convenient to note at this point that some of the work described in the Patents was published on 6 December 1990 in a paper by McCafferty et al, "Phage antibodies displaying antibody variable domains", Nature, 348, 552–554 ("McCafferty"). The authors of McCafferty were a group of four scientists from CAT and the MRC Laboratory of Molecular Biology led by Dr (now Sir) Greg Winter. Those four together with eight others are the named inventors of the Patents.

Apart from the priority attack, Novartis' principal challenge to the validity of the claims of the Patents in issue is that they are obvious over Parmley and Smith, "Antibody-selectable filamentous fd phage vectors: affinity purification of target genes", Gene, 73, 305–318 (1988) ("Parmley & Smith") and a talk entitled "Filamentous phage as vectors for antibody libraries" given by Professor George Smith of the University of Missouri at a conference on "Vectors for Cloning the Immune Response" held at the Banbury Center, Cold Spring Harbor Laboratory, New York on 23–26 April 1990 ("the Banbury Conference"). In addition, Novartis contends that the Patents are invalid on the grounds of insufficiency and added matter.

The claims in issue are claims 5–8 of 511 and claim 1 of 777. All of these claims are process claims. MedImmune alleges that Novartis has infringed these claims by virtue of section 60(1)(c) of the Patents Act 1977. Novartis disputes both that Lucentis was produced by a process which falls within the scope of the claims and that Lucentis is a product "obtained directly by means of" any of the claimed processes.

The following account of the technical background to this dispute is largely based on the technical primer ("the Primer") which the parties sensibly agreed for use in these proceedings, supplemented to a...