BUSINESS AND PROPERTY COURTS IN BRISTOL

(sitting as a Judge of the High Court)

The First Respondent was not present or represented

This is my judgment on the trial of the remaining part of what has been called the Bankruptcy Application, issued on 12 February 2019 against Duncan Swift, the first (and at that time the only) respondent, who was the applicants' former trustee in bankruptcy. The second respondent (“Chedington”) was joined later. It concerns a claim to revest in the applicants (Mr and Mrs Brake) interests or claimed interests in land known as West Axnoller Cottage (“the cottage”) and two small parcels of adjacent land, under section 283A of the Insolvency Act 1986. This claim was tried by me on 14, 15, 18, 19 May 2020, remotely by video conferencing during the Covid-19 Pandemic. I will come back to the technological issues later.

The background to this claim is complex. I summarise it briefly here, based on summaries of the litigation which I have given in earlier judgments, supplemented by evidence in this case. I go into many of these matters in more detail later in this judgment. In September 2004, the first applicant (then Mrs D'Arcy, but whom I shall call by her current name, Mrs Brake) acquired West Axnoller Farm from local landowners, the Vickery family (who continued to have substantial landholdings locally). This property included a substantial dwelling-house known subsequently as Axnoller House (marked as “1” on the plan below). In 2006 Mrs Brake began to operate a holiday letting business at the Farm, subsequently joined in partnership in 2008 by her husband, the second claimant (“Mr Brake”).

Just outside the southern boundary of the Farm, on the other side of the private lane leading to the Farm, lies another residential property known as West Axnoller Cottage (the “cottage”, marked as “2” on the plan below). In July 2002 a Mr and Mrs White had purchased the cottage from the Vickery family and were living there when Mrs Brake bought the Farm. In 2006 Mrs Brake bought and was registered (again under her former name of D'Arcy) as proprietor of two further small parcels of land from the Vickery family, one on either side of the cottage (marked “3” and “4” on the plan below). The one on the west side is long and thin, and runs alongside the private lane for some distance (but not as far as the public highway). It also runs east on the south side of the cottage as a narrow strip of land only 4 feet wide. (On the plan below, it is shown simply as a thick black line.) The parcel on the east side of the cottage is more regular in shape, in effect two rectangles put together to form an L shape. Together these two parcels have in this litigation been variously referred to (by the applicants) as “the Cottage Access Land” and (by Chedington) as “the strip” or “the ransom strip”. Despite the name given to that land in this litigation by the applicants, Mr and Mrs White never owned them. The cottage had direct access to the lane. I will call these two parcels the “Adjacent Land” or the “adjacent parcels”. The land to the south of the cottage continued to belong to third parties, although Chedington finally bought it in 2019. 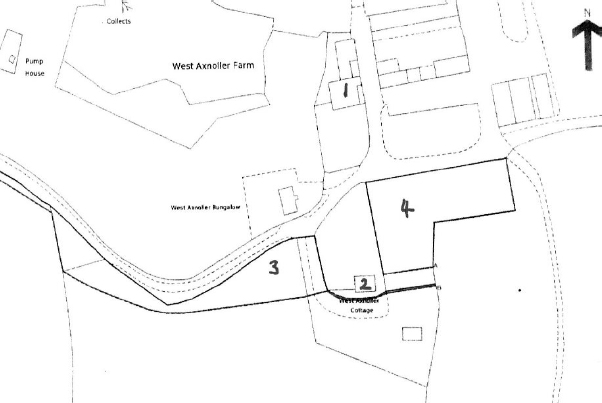 Mrs Brake borrowed money from bankers Adam and Co in 2006, secured by a first legal charge on the Farm. The financial crisis of 2008 made it impossible to obtain further bank finance to expand the business being carried on at the Farm. The applicants therefore looked for an outside investor. In 2009 Mrs Brake met Lorraine Brehme (“Mrs Brehme”), who was looking for a new venture. In February 2010 the applicants entered into a partnership with a limited partnership called Patley Wood Farm LLP (“PWF”), whose principal was Mrs Brehme. In essence PWF was Mrs Brehme's investment vehicle. The new partnership (known as “Stay in Style”) was to carry on the business of providing luxurious weekend and other breaks, and hosting events such as weddings. The applicants contributed the Farm as partnership property, although it remained charged to Adam & Co to secure existing borrowings. With funds contributed by Mrs Brehme, on 8 March 2010 the partnership acquired the cottage, the legal title to which was transferred to the applicants and Mrs Brehme jointly, who were registered as proprietors. At first the cottage was used as accommodation for a housekeeper and then for a personal assistant (Simon Windus) and his family. After they left in 2012 it was used (inter alia) for the applicants to stay in when the main house was let.

Differences arose between the applicants on the one hand and PWF on the other, as partners in Stay in Style. In accordance with the partnership agreement, these were referred to arbitration. That arbitration ended on 21 June 2013 with an award in favour of PWF, and the dissolution of the partnership. The applicants in the meantime (in December 2012) asserted a claim in the High Court against Mrs Brehme and PWF, initially for damages for failure to make promised investments (“the Damages Claim”), and also for specific performance of an alleged agreement to transfer the cottage to the applicants. By amendment in July 2013 a further claim was added for a proprietary estoppel equity relating to the cottage. This claim has been stayed since the applicants became bankrupt in 2015, and so the proprietary estoppel claim still remains unvindicated. Following a failure to pay orders made against them for costs in the arbitration, the applicants were adjudicated bankrupt on 12 May 2015. The partnership itself subsequently went into administration (in 2016), and then into liquidation (in 2017).

There were disputes between the applicants and the relevant insolvency officials about many aspects of the bankruptcies and the liquidation. One was and is whether the cottage is partnership property, or the beneficial property of the Brakes. In addition, in October 2014 Adam & Co, the bank which had lent money to Mrs Brake against the security of the Farm, appointed receivers under the Law of Property Act 1925. After marketing the property, they sold it in July 2015 to a newly incorporated company, Sarafina Properties Limited, a corporate vehicle for the Hon Saffron Foster (“Mrs Foster”). I am told that Mrs Foster is a daughter of Lord Vestey, as well as a friend of the applicants. The cottage and the adjacent two parcels of land were not included in this sale, never having been subject to the bank's charge.

Purchase of Sarafina Properties Ltd by the second respondent

In February 2017 Mrs Foster sold the company to Chedington, and its name was changed to Axnoller Events Limited (“AEL”). Chedington is an investment vehicle for Dr Geoffrey Guy (“Dr Guy”). Mrs Brake was employed by AEL to continue to run the wedding and rental accommodation business as before. There is a dispute about the position of Mr Brake. Relations between the parties broke down however, and on 8 November 2018 notice was given of termination of their employment. This has led to proceedings in the employment tribunal against Chedington and others by each of the applicants (“the Employment Claims”), and proceedings in the High Court by AEL against the applicants to recover possession of the Farm (“the Possession Claim”). There is a further dispute between the parties concerning an email account that was formerly used for the purposes of the business at the Farm (“the Documents Claim”). I am not concerned with any of this in these proceedings.

Transactions relating to the cottage