IN THE SUPREME COURT OF JUDICATURE

ON APPEAL FROM THE HIGH COURT OF JUSTICE

The appellants are Reed Business Information Ltd., Reed Elsevier (UK) Ltd. and totaljobs.com Ltd. They are companies within the large multinational publishing group, which goes by the general appellation "Reed Elsevier." For practical purposes in this appeal it is not necessary to distinguish between them. I shall call them collectively "RBI".

For many years RBI have published a big range (about 50) of magazines and journals, such as New Scientist, Farmers Weekly, Motor Trader and so on, some more specialist than others. These carry, in addition to ordinary advertisements for products and services, large sections devoted to job advertisements. So, for many years, job-seekers (as I shall call those wanting employment) have scanned the relevant-to-them sections of RBI's relevant magazines. Such advertisements are not necessarily placed directly by employers, though many are – they can be placed by employment agencies acting for the employer or more generally by recruitment consultants. Generally speaking if the advertisement is placed by an employer (possibly on advice) he names himself and gives appropriate contact details. On the other hand where there is a middleman who has a financial interest in the placement, the employer is not specifically identified – the job-seeker must contact the middleman and will not know who the employer actually is unless the middleman passes on his name. That he will only do if he considers the job-seeker suitable for the job.

In parallel to RBI's activities were those of the respondents and their associated companies. Their beginning was in 1960 when Mr Alec Reed rented his first shop in Hounslow. He advertised for secretarial and clerical workers, forming a database of these. Initially he telephoned round employers who wanted staff and put job-seekers he thought were suitable in contact with them. The business expanded geographically and in the kinds of job-seeker and employer for whom it catered. When RBI commenced the activities complained of (September 1999) the respondents had long been a nationwide business covering a wide spectrum of types of jobs and having a physical presence in many a high street. Broadly speaking the business of the respondents can be called that of an "employment agent." I shall call them, as did the judge, "Reed Employment".

Reed Employment registered the trade mark in suit in 1986, shortly after registration of marks for services became possible in this country. The registration is of the word "Reed" as such under No.1,295,450 in Class 3The specification of services is "Employment agency services included in Class 35."

Class 35 is "Advertising; business management; business administration; office functions." It is currently specified in Schedule 3 to the Trade Marks Rules 2000, reproducing the internationally agreed classification provided for by the Nice Agreement. This vast, very woolly-at-the-edges, class clearly covers the activities of both sides, whether one views the position as at the date of registration (1986), now, or at any time in between. So no point turns on "included in Class 35." But there is a dispute over whether RBI's activities fall within the words "Employment agency services".

In 1995 Reed Employment first started using the internet as a business tool. By early 1996 it was advertising job vacancies on its website, www.reed.co.uk. The advertisements at that time did not, just as in the case of their paper advertisements (in shops or publications), name the employer. The job-seeker had to go through Reed Employment whose decision it was whether or not to put the two parties in contact.

RBI also started to use the internet. It began with on-line versions of its magazines which included job advertisements. It was decided to go further and create a special dedicated jobs-related website, totaljobs.com. The first version was experimental and ran for just a few months, July to October 1999. There followed a series of increasingly sophisticated versions. The Judge describes the various versions in detail. There is no challenge to the accuracy of his descriptions. So I do not need to repeat all the detail. This is particularly so because Mr Geoffrey Hobbs QC for Reed Employment, being a member, as he says, of the "realist school of jurisprudence,"has accepted in relation to the issue of whether totaljobs was an "employment agency service" that his case gets no better beyond version 3. It was either such a service by then, or not at all. I think Mr Hobbs was right to make this concession and I am grateful to him for it.

The judge describes Version 1 as follows:

"This website was not actively promoted, but it contained links to existing jobs websites associated with RBI publications and directly used the jobs databases of these websites. The only reproduction showing the appearance of this website with which I have been provided is a poor print of the home page, but a number of points can be made:

i) Its name is clearly totaljobs. This appears prominently at the top of the page, above a notice stating that

'totaljobs.com will be fully operational by the end of August. In the meantime please be patient if there are some intermittent problems with the functionality and do keep coming back regularly as we will be adding more exciting features on a regular basis.'

ii) Two logos, the Reed Elsevier logo and the RBI logo appear prominently below the notice, and next to the latter is a suggestion that potential advertisers should contact RBI.

iii) For the job-seeker there is a scrolling list of job categories to select, and the usual GO button.

iv) On the right of the page is a column of additional features entitled 'career advisor', 'information' and 'links'. Under 'career advisor' there are two links labelled 'Drafting a successful CV' and 'Writing a good Application Letter'. Under 'information' there is advice on how to recruit using totaljobs.com and help on using the site. Under 'links' two buttons are labelled 'About Reed Business Information' and 'Subscribe to Reed Business Information magazines'.

At the bottom of the page there is a banner advertisement" 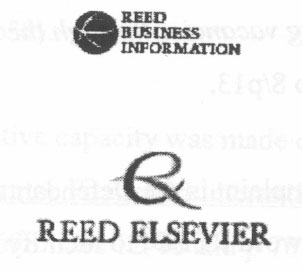 I would add two things. First, that the banner advertisement adds nothing relevant and secondly that there was the following message adjacent to the RBI logo: "Contact Reed Business Information if you would like to advertise your company's job vacancies."

The judge summarised the position thus:

Mr Martin Howe QC for RBI does not challenge the judge's summary of the position – Version 1 would be perceived as emanating from a business called "Reed Business Information".

The General Nature of the Issues

All versions of the totaljobs website which contained a use of the word "Reed" (visible or in metatag form) were accused of constituting passing off and infringement of registered trade mark. The Judge found both. Largely he dealt with all versions together. He dealt with infringement first. It is not entirely clear whether he held there was infringement pursuant to s.10(1) of the Trade Marks Act 1994 (implementing Art. 5(1)(a) of the Trade Marks Directive (89/104)). He clearly held there was at least infringement pursuant to s.10(2) (implementing Art.5.1(b)) and, save in relation to very minor matters (use on invoices and at a trade show) that section 11(2) (implementing Art. 6.1) afforded no defence. As to passing off he again dealt with all versions globally, holding that "the classical trinity of ingredients in a passing off action, reputation, confusion leading to deception and damage, are present" and that save in respect of the same minor matters no defence of own name applied.

I think this "overall" approach in relation to trade mark infringement can lead to muddle and error. It is essential to know in respect of each alleged infringement whether it is an Art. 5.1(a) or 5.1(b) case. If it is the former one need go no further save to consider whether an Art.6 defence applies. If it is the latter then there is a vital "likelihood of confusion" question to be answered. For that reason I intend to be rather more systematic than the Judge.

RBI do not challenge all of the Judge's findings. They dropped the use of both logos in June 2000 (the Reed Elsevier logo after Version 1 and the RBI logo during the course of Version 4)...