This is a claim for trade mark infringement and passing off. The Claimant ("LTC") is the successor in title to the manufacturer of the Fairway, TX1, TXII and TX4 models of London taxi. The Defendants are the successors in title to the manufacturer of the Beardmore, Oxford and Metrocab models of London taxi. LTC owns trade mark registrations for the shapes of the Fairway and of the TX1/TXII respectively ("the Trade Marks") and claims goodwill in the shapes of all four models. It alleges that the Defendants threaten to infringe the Trade Marks and to commit passing off by marketing a new model of London taxi referred to as the new Metrocab which is currently being trialled. (Strictly speaking, it is the Second Defendant ("Ecotive") which threatens to do this, while the First Defendant ("FNR") will supply parts for the new Metrocab, and in particular the powertrain; but nothing turns on this.)

LTC's complaint concerns the shape of the Defendants' taxi, which it contends has been substantially copied from the shape of the TX4, yet it advances no claim for infringement of any registered design, design right or copyright. Furthermore, LTC alleges that the Defendants intend to deceive the public as to the origin of the new Metrocab by adopting a shape which closely resembles that of LTC's models, which is an allegation of fraud. Unsurprisingly, these allegations have increased the temperature, as well as the duration and expense, of the dispute.

LTC claims infringement of the Trade Marks on three alternative bases as well as passing off. The Defendants deny trade mark infringement and passing off. Furthermore, they contend that the Trade Marks are invalidly registered because they lack distinctive character and add substantial value to the goods. In the alternative the Defendants contend that the CTM should be revoked for non-use. LTC relies upon acquired distinctive character and disputes the allegation of non-use on two different bases. As a result, a considerable number of issues have been raised for decision.

Although counsel for LTC addressed passing off first in his submissions, I have found it more convenient in this judgment to consider the issues in the conventional order, which involves dealing with the trade mark issues first.

I had the advantage of being able to inspect examples of the Fairway, TX1, TXII, TX4 and new Metrocab side by side during the trial. This assisted me to understand some of the evidence, but I have borne in mind that, as explained below, the side-by side comparison is not the one that matters for the purposes of trade mark infringement or passing off.

The Fairway, TX1, TXII and TX4

The Fairway is shown below:

The TX1 is shown below: 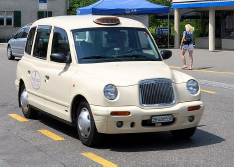 The exterior appearance of the TXII was essentially the same as that of the TXI.

The TX4 is shown below: 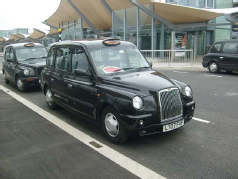 LTC is the registered proprietor of Community Trade Mark No. 951871 registered as of 5 October 1998 in respect of "motor vehicles, accessories for motor vehicles; parts and fittings for the aforesaid" in Class 12 ("the CTM"). The specification of the CTM also extends to goods in Classes 6, 16, 18, 21 and 28, but they are not in issue. The CTM is a three-dimensional trade mark represented as follows:

LTC is also the registered proprietor of United Kingdom Trade Mark No. 2440659 registered as of 1 December 2006 in respect of "cars; cars, all being taxis" in Class 12 ("the UKTM"). The UKTM is a three-dimensional trade mark represented as follows: 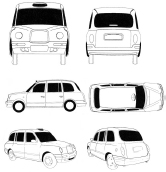 The same six representations also form the subject-matter of LTC's UK Registered Design No.2069313, which is not relied upon by LTC in these proceedings.

The new Metrocab is shown below:

The new Metrocab is shown next to a TX4 below:

LTC adduced evidence from 12 witnesses, who can be grouped into four categories, as follows.

i) Peter Johansen is the Chief Executive Officer of LTC, but has only been involved in the business since 2012. He was LTC's principal witness in support of the claim to goodwill in the shape of the LTC taxis, which he did primarily by exhibiting a wide range of documentary evidence. He also gave evidence as to the use of the CTM based on LTC's records.