BUSINESS AND PROPERTY COURTS OF ENGLAND AND WALES

(sitting as a Judge of the High Court)

This is my judgment on a claim under CPR Part 8, issued on 13 November 2018, brought by the Claimants, the owners of the fee simple estate in land and premises at and known as 25–27 Potter Street, Bishops Stortford Hertfordshire (“the Property”), against the Defendant, a statutory water undertaker, in respect of (i) a water main passing underneath the Property, and (ii) a service pipe, stop tap and meter in an underground chamber on the Property, connecting the water main to adjacent premises at 31A Potter Street. In essence, the Claimants' claim is that the water main, service pipe, stop tap and meter all amount to an actionable trespass on the Property, for which the Claimants seek declaratory and injunctive relief, damages and interest.

The Defendant says that both the water main and the service pipe, stop tap and meter were installed in the exercise of statutory powers, or alternatively (in relation to the water main) that the water main was installed pursuant to the grant of an easement to that effect by a deed of grant dated 26 March 1947, made between the parties' predecessors in title. As a further alternative, the Defendant claims an easement by prescription. The Claimant however denies that any relevant statutory powers apply, that the deed of 26 March 1947 created any more than a revocable licence, and also that any prescriptive easement has been established.

At the trial of the claim before me Mr Douglas Edwards QC and Mr Philip Petchey appeared for the Claimants, and Mr Guy Fetherstonhaugh QC and Ms Fern Horsfield-Schonhut appeared for the defendant. I am very grateful to them for their clear, helpful and measured submissions, and appreciate the co-operative spirit in which this matter was litigated and tried. I am also grateful to them for their patience in dealing with a number of suggestions that came from the bench during the course of the hearing.

This is an unusual case, because in large part it concerns and depends upon events that took place many years ago, indeed probably before any of those now involved were born. On the other hand, it is a claim under CPR Part 8, which is only appropriate where there is unlikely to be a significant dispute of fact. And, indeed, at trial there were very few disputes of fact. Nevertheless, I make clear that in our system civil judges look carefully at all the oral and written material presented, with the benefit of forensic analysis (including cross-examination of oral witnesses, where that is important), and the arguments made, to them, and then make up their minds. But, even so, decisions made by civil judges are not necessarily the objective truth of the matter. Instead, they are the judge's own assessment of the most likely facts based on the materials which the parties have chosen to place before the court, taking into account to some extent also what the court considers that they should have been able to put before the court but chose not to. And, whilst judges give their reasons for their decisions (as I am doing now), they cannot and do not explain every little detail or respond to every point made.

In cases, and especially commercial cases, where witnesses give evidence as to what happened based on their memories, which may be faulty, civil judges nowadays often prefer to rely on the documents in the case, as being more objective. In Gestmin SGPS SPA v Credit Suisse (UK) Ltd [2013] EWHC 3560 (Comm), [16]–[20], an experienced commercial judge, Leggatt J (as he then was), commented on modern research into the nature of memory and the unreliability of eyewitness evidence. I have already commented on the particular feature of the present case that there are no witnesses who were involved in some of the important matters which have to be considered. In my judgment, the absence of contemporary witnesses means that the documentary evidence available to the court becomes even more important. But in finding the facts for my decision, I have given appropriate weight to all of the different kinds of evidence in this case: the documentary evidence, the “real” evidence and the oral evidence.

The story begins over a century ago. On 29 September 1914, one Marshall Taylor of Bishops Stortford conveyed to the UDC certain land described in the conveyance and situated

“on the south side of The Causeway in Bishops Stortford aforesaid and for the purpose of identification but not for enlarging or restricting the description hereinbefore contained particularly delineated in the plan annexed to these presents,”

for an estate in fee simple absolute in possession. This was then unregistered land, and it remained so until 1995.

The Causeway was then and still is a road running roughly north-west to south-east through the centre of Bishop's Stortford, and to the east of the Property, on the far side of the branch of the River Stort which then ran along the Property's eastern boundary. (As I describe below, this branch has now been filled in and replaced by a tarmac road running on the same course, called Riverside.) The plan attached to the 1914 conveyance makes clear that the land conveyed to the UDC included the whole of a tongue of land to the south of The Causeway between that same branch of the River Stort (on its western side) and the River Stort navigation channel leading to a wharf basin (on its eastern side), the wharf basin itself being included in the conveyance.

Rather than append the plan to the 1914 conveyance (which does not show the Property), I reproduce below a copy of part of an Ordnance Survey map of 1896. This is only for the purpose of showing their respective positions, and is not otherwise significant. It shows the Property on the left and the land conveyed in 1914 to the UDC on the right, in each case bounded by a thick line, and separated by a branch of the River Stort. 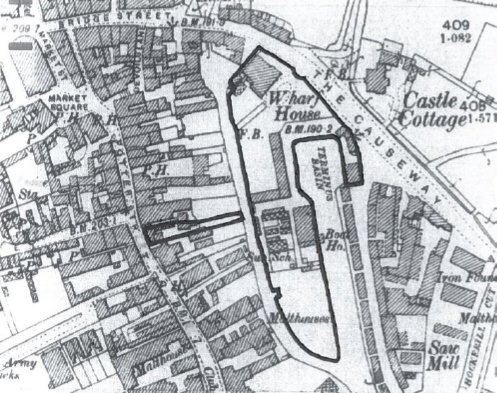 Most of the tongue of land conveyed to the UDC in 1914 is now covered by a shopping centre to the north, called the Jackson Square Shopping Centre, and a multistory car park to the south. But on the western edge of this tongue of land, almost directly opposite the eastern end of the Property, there is a water pumping station, the current structure having been constructed in the 1970s. It contains water pumping and purification equipment, and two boreholes, one disused, and one still in operation. The multi-storey car park occupies the area to the east and north of it, and the air space above it (this latter by virtue of a long lease granted on 1 April 2005 by the Defendant under an earlier name).

During the Second World War the UDC, in common with other local authorities, took steps to safeguard its water supplies under wartime conditions. But, by late 1943, with the tide of the war turning, the UDC had appointed a subcommittee to consider general improvements to services and amenities of the town of Bishops Stortford after the war was over.

On 16 November 1943, this subcommittee considered a report prepared by a subcommittee of the Highways, Public Health, Water Works, Housing and Town Planning Committee, which referred to

“a scheme for the sinking of a bore hole and the installation of necessary pumping plant at a point in the Causeway for the purpose of supplementing the supply to the town”.

On 14 December 1943, the Highways, Public Health, Water Works, Housing and Town Planning Committee itself considered that report from its subcommittee and looked forward to a final report. That subcommittee met on 21 December 1943. The minutes of its meeting show that the subcommittee

“expressed itself as being in favour of the proposals now submitted to construct a 33 inch borehole, together with suitable pumping plant on land in...